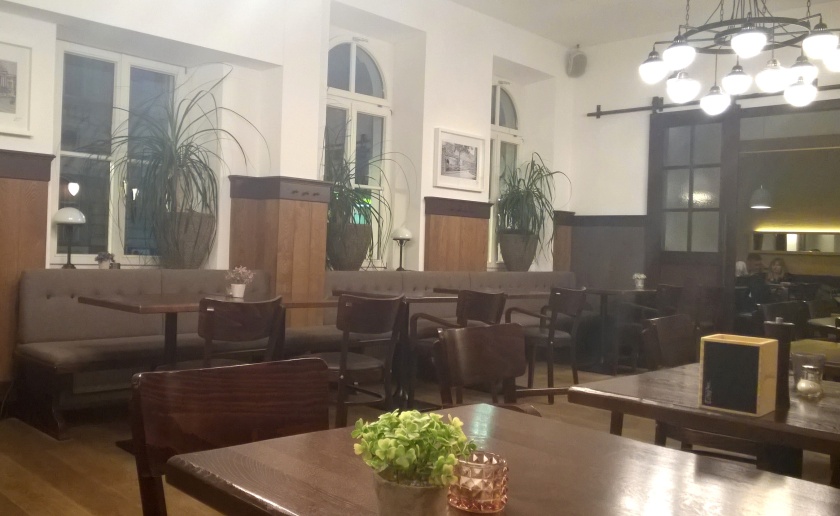 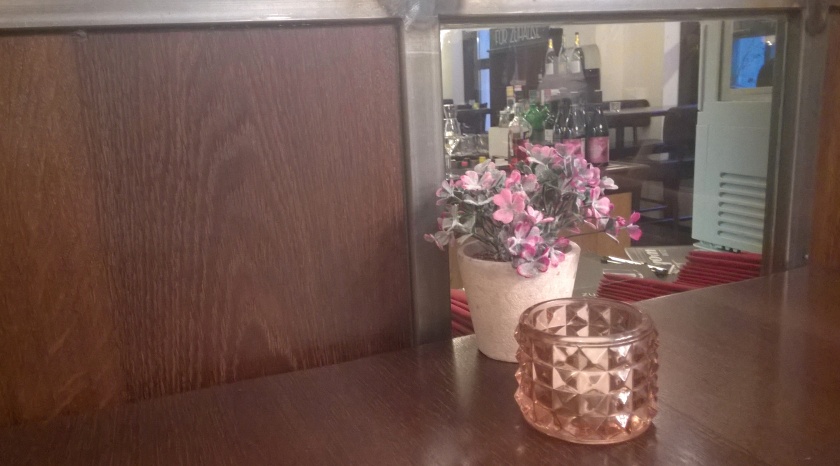 Zum Wohl has a relaxed atmosphere and a cozy interior, a bit like an older style bistro. It reminded me a of  Spinoza , another great bistro. We visited quite late for dinner, and it was not very busy anymore. There is a large room, and a smaller room in the back where a football (soccer) game was on. We didn’t watch though 🙂 There’s also a nice terrace outside. I believe they also do delivery via Foodora. There is a special, smaller lunch menu and a more extensive menu for dinner. 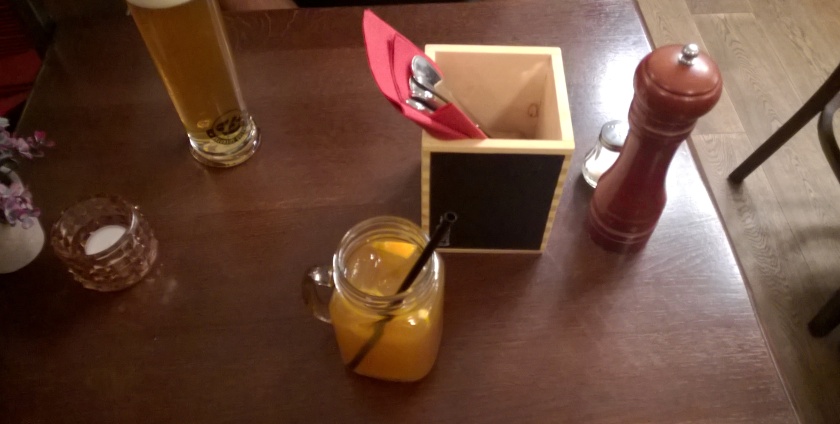 Zum Wohl focuses on fresh, regional ingredients, and the menu card actually mentions several of these local suppliers. The food that is served is a mix of more typical Austrian fare, like “knödel” and pancakes, Italian dishes like risottos and pasta, and more exotic foods like a quinoa salad and a chickpea curry. As with all Austrian places I have seen so far, for every dish (common) allergens which might be present are noted.

We started with the fermented red beet carpaccio, with balsamic cream and nuts. The sour sauce goes very well with the sweet beets! It is served with a small slice coarse bread, which I like. There was a little bit of salad on the beets but it could’ve been left off because it was looking pretty sad.

After we tried the “spinatknödel” (spinach dumplings) in tomato sauce, served with nut pesto, and zucchini/carrot noodles in sauce, with herb pesto. I really liked the spinach dumplings, the dough is actually mixed with the spinach, rather than the spinach being packaged in the dough. This creates a very interesting spongy texture, which sounds strange but it was very good! The noodles were served in a sauce with beans and potatoes, which is slightly spicy. I also really enjoyed the pesto which is made of nuts. Both dishes are nice and light.

There are also vegan desserts at Zum Wohl! Well there is exactly one, but that is sufficient. The dessert is a vegan ‘panna cotta’, topped with coconut shavings and sour berries. It is not very sweet, but like the mains very fresh and light.

I really enjoyed the meal and the ambiance at Zum Wohl. The service was also good! What was also nice is that most vegan dishes are actually cheaper than the non-vegan ones.

Vegana Indiana is a vegan, gluten-free and dog-friendly bar/restaurant in Vienna, so you can go for coffee and cakes, and also for a full meal. The decorations are natural with a rough edge, with wooden accents and a lot of plants. They play pop music, which makes for an interesting contrast. There is also a terrace, and they do take-away.

We initially went in for a coffee and a small snack, but after seeing the menu card we really wanted to try a full-size dish because the food looked very interesting!  The dishes are original, and they use a lot of local ingredients. The menu also states common allergens that might be present in a dish, something I have noticed in other Viennese restaurants as well. 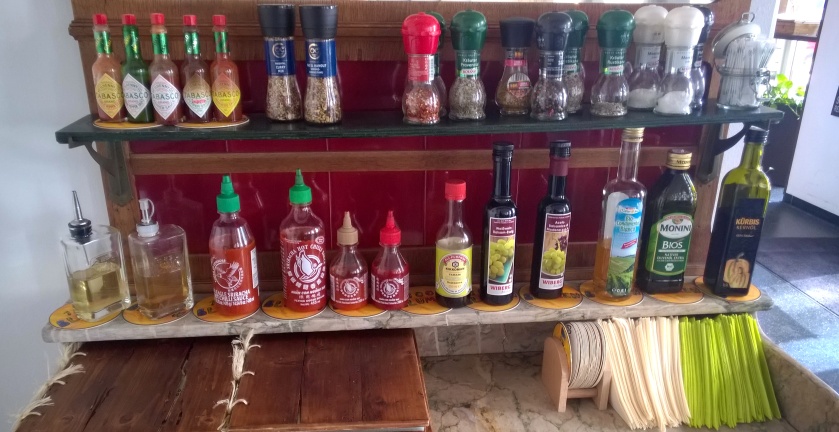 We shared a dish of Gary (vegan cheese**) and potatoes which was served with cranberries and vegan mayonnaise. The potatoes are nice and crispy and the vegan cheese is very tasty.  We also got a small (gluten-free!) piece of bread with it, which was tasty.

I also tried ice coffee with almond milk, which has actual ice cream!

For dessert we tried a pancake with jam (tasty, not very special), and a ‘marillenknödel’, a dumpling with apricot. These dumplings are quite specific to the Austrian and Czech cuisine. They are formed from dough, a whole apricot is put inside, then they are boiled in salted water and covered with bread crumbs and powdered sugar.  I never had one before so I didn’t know what to expect. They are not very sweet, the dough was a bit soft and crumbly. Not sure if it is my new favourite pastry, but I am glad to have been able to try this traditional Viennese dish!

So yes, great place, can recommend! One downside: Only cash accepted! (Though this is something that seems a bit more common in Vienna)

Akakiko is a chain restaurant in Austria which serves ‘easy Japanese fusion’. The interior has a Japanese and modern feel, with modern music. The location we happened to visit had the interesting feature that the bathroom was situated outside of the restaurant (which was located in a residential building) Of course not relevant to the food, but it stood out.

The place was pretty busy when we were there, with a pretty diverse crowd. We happened to be near the Stephansdom, which is in the touristy centre of Vienna. There were several tourists (like us!) but I think there were also actual Viennese lunchers. It is definitely more of a bistro than a fancy restaurant, which is also reflected in the prices. They also do take-out and delivery.

Akakiko serves several vegan dishes, which are clearly marked on the menu card. At the back of the menu card there is even a small section where all vegan dishes are grouped together. Most of the vegan options are the starters and smaller dishes, like sushi, but there is also a vegan main. The menu is quite large and it was a bit unclear how much a portion is especially for the starters and side dishes.

Good thing we were hungry, so we decided to just try a bunch of dishes. For starters we had a kabechu salad (cabbage salad), fried rice mix, vegetable gyoza and harumaki (Japanese spring rolls). The kabechu salad was really nice and refreshing, a bit spicey. The gyoza were very nice, crispy and delicate, filled with rice and vegetables. It was served with a spicy sauce. The menu says you get 6 but we got 7, which is also okay! The harumaki had a similar filling and were also very nice, not too oily. The fried rice mix is really almost a complete dish, not really a side or a starter.

For mains we wanted to try the yasai sushi and spicey veg (complete dish) And we got them while we were still eating the starters, which was a bit annoying as the table space was quite limited.

The yasai sushi is a combination of vegetable sushi and maki. The vegetables used, like broccoli, made it quite interesting. The taste was okay, but a bit dry. The spicy veg dish consists of rice with vegetables and mushrooms in a spicy Chilli-Soy sauce. I didn’t think it was very special but it hit the spot.

Akakiko serves vegan desserts! I find that many traditional Japanese sweets are actually vegan, but many Japanese restaurants tend to serve “western-style” desserts. Which is a shame, because I love Japanese desserts. At Akakiko we tried the mochi dessert: a rice cake with filling which was served with melon. The mochi was nice and soft, the taste of the filling was not very strong, in a pleasant way.  They also serve “apple gyoza”, which was a similar dough as the vegetable gyoza but filled with apple.  The combination of apple with the crispy gyoza was very good! It reminded me a bit of apple pie (unsurprisingly)

The food was okay, I especially loved the kabechu salad and the gyoza.  The service was unfortunately quite sloppy. We somehow got all our food at once, both the starters and the mains. One of our dishes was forgotten (we got it quickly after reminding the server). And then the desserts were served one after the other, with enough time to finish one dessert and wait around for the next one, which was very strange.

For some people burgers are the ultimate junk food, and I have mentioned some  great vegan burgers on this blog before. In Vienna I visited the Swing Kitchen,  where the specialty is … vegan burgers! The couple that came up with the concept of Swing Kitchen, Irene and Charly Schillinger, used to run a successful completely vegan pub near Vienna, where they translated traditional Austrian recipes into vegan versions. After they turned their attention to Swing Kitchen, a vegan burger restaurant with several locations in Vienna and one in Graz. (Fun fact, one of these locations used to be a McDonald’s!) Swing Kitchen focuses on 100% vegan and environmentally conscious fast food.

The atmosphere of the location we were at was great. The name is derived from the fact that they play swing music! The interior itself is clean and modern. There is a long bar table along the windows, several tables and seats, and a terrace. The crowd is, as maybe expected, mostly younger people. Being a more fast-food type place, they do take-out and delivery as well. We managed to snag a table, and there was quite a crowd later so that is something to keep in mind!

Swing Kitchen serves burgers and fries, but also salads like coleslaw, and wraps. You choose the food at the counter, and wait for the order to be made. At the counter the desserts are also displayed, because yes there are vegan desserts! In line with the eco-conscious mission, all straws and cutlery are bio degradable. The napkins are from recycled paper.

There is a menu-deal consisting of a burger with fries and a drink. We took two deals, one with the Vienna Burger and normal fries, and the ‘cheese’ burger with sweet potato fries. Additionally we got the onion rings and vegan nuggets to try, with a garlic dip and mayonnaise.

I have to say that the portions are more reasonable than at the  Vegan Junkfood Bar (the gold standard of junk food at this blog) The mayonnaise is a bit thick, but it was good. I like the garlic dip too, the little pots were just a bit inconvenient for dipping the slightly larger fries in. I liked the nuggets, they were not very special though. The onion rings were a bit strange, I expected a single onion slice to be in there but it was more of a mash.

Now the burgers, they are great ! The Vienna burger has a vegan schnitzel and garlic sauce, and the Cheese burger has a more standard patty, but with a slice of vegan cheese. The buns are big but not excessive. I liked that the patties and fillings were noticeably different, the Vienna Burger was more light and fresh, and the Cheese burger was just good old-fashioned (but cruelty-free) burger joy. The normal fries are nice and thick, but not very crunchy. The sweet potato fries have the shape of a grid, which makes dipping hard in the tiny dipping pots! Also not very crunchy, but good either way.  Swing Kitchen also serves some interesting cold drinks, I had an elder flower soda. They also serve juices, ice tea and coffee.

Now the desserts! When we visited there was a choice of 5 and I have to say that choosing was quite hard.  We tried the cheese cake and almond nougat dream. The cheese cake had a great structure, and it was fresh and not too sweet likely due to the sour cherries.  The latter is an almond cake with a nougat outside and layers of chocolate mouse and sponge-y cake inside.  It was not as heavy as chocolate cakes tend to be. A dream indeed!

Overall I have to say that the price was very reasonable and the food is good. It is great to see a vegan place being so popular that there are several different locations opening up!