Cinnamon Snail started as the first vegan organic food truck in the US, in 2010, and has since then become well known. They have now two locations in NYC in addition to the food truck (in Fidi and in the Pennsy food hall). I initially searched for the food truck, but couldn’t find it. So I went to the nearby Pennsy food hall instead. I actually visited Cinnamon Snail a few times during my stay in NYC, to try several different foods. Choosing is hard with such great options!

Of course the Cinnamon Snail is mostly known for their sweets: cinnamon rolls and doughnuts. But they also have very nice savoury foods like sandwiches and burgers. You can order take-out and delivery from the food truck and the Fidi location, I believe all locations have slightly different foods.

There are is space to sit in the Pennsy food hall, though it gets very busy. For my first visit of Cinnamon Snail I wanted to try some pastries! I had a cinnamon roll (of course), a peanut butter cookie party and a raspberry danish. All sweets are quite big and sugary, as expected!

I later went back to try some of the savoury foods; a Memphis BBQ Deluxe burger (lentil burger on a pretzel bun, of which I have no picture), chilli cheese tater tots and a creole grilled tofu sandwich.

Unfortunately it is quite difficult to make a nice pictures since the food is more prepared for take-out. Of course we mostly care about the taste, and it that department there are no complaints! The place itself is also pretty busy, so I guess other people agree with me 😀 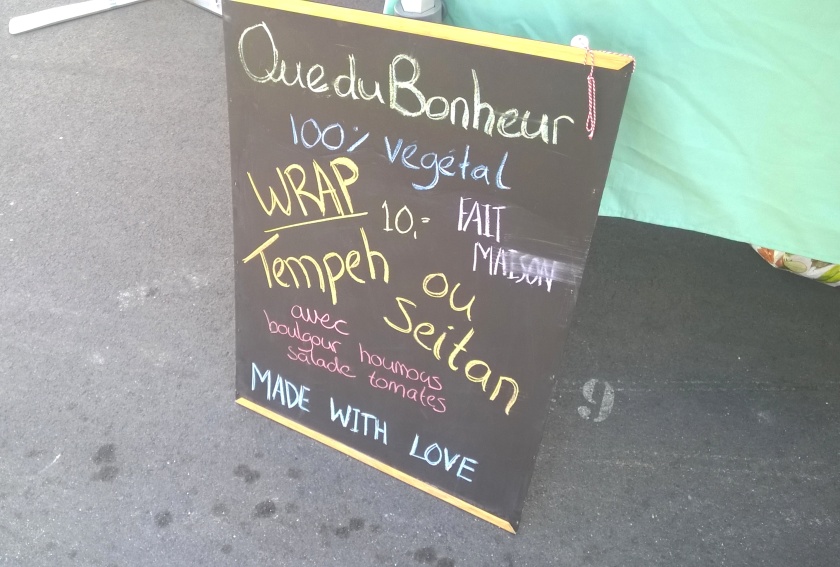 A short post, but I think this place needs more recognition! Planty is a new small company bringing delicious plant-based pastries! They do catering, and have a food stall “Que de Bonheur”, which can be found at PlainPalais market in Geneva, on Tuesday and Friday (from 8:30 to 14:00). Planty is zero-waste, so you can bring your own container!

At their food stall I tried a piece of quiche and a seitan wrap, the latter being assembled at the spot! Can recommend! Of course I also tried a piece of lemon pie and some chocolate chip cookies. And yes, they are tasty as they look!

Occasionally the food stall is present at festivals, which are announced on their Facebook. They will be at Geneva’s vegan festival which is the 20 and 21 October, http://urbanvge.ch/festival-vegan-2018/  ! I went to the festival last year, and it was a HUGE success. It was so busy that it was almost impossible to enter the room in which it was held 😀  This year the festival will be 2 days, and I will definitively pop by!

We found this tiny bakery when walking around the maze that is Venice looking for some focaccias. A shop window promoted vegan pastries, but it was a bit unclear where the bakery itself was!  The entrance was in fact in a different street, but it was easily findable from the other direction. While the advertisement mentioned both sweet and salty pastries (in both vegan and non-vegan variety) it was mostly sweets in the shop. Well, the focaccia would have to wait !
The actual vegan offering was limited: some cookies and packaged muffins. But the cookies looked very good, and I am all for supporting businesses that offer vegan foods. The bakery has a small seating area and also offers coffee. Soy milk is available. (Later I found that this place is mentioned on HappyCow and that they also have other milk alternatives as well)

The cookies were very tasty, they had some kind of jam inside. The coffee was not stellar. That might also be due to my standards shifting after drinking many great Italian coffees the last few days 🙂

Type of place: bakery
Completely vegan: no
Website: none

Link to HappyCow for the address : https://www.happycow.net/reviews/pasticceria-ponte-delle-paste-venice-79528

A short post today, I just found back this picture and realised I wanted to quickly mention this little gem!

I happened upon this bakery when visiting a dear friend in The Hague (aka Den Haag in Dutch). We were actually searching for a place to have lunch, but I saw this bakery which had  several vegan cakes available, and I knew that after lunch I needed to get back for a pastry!

The bakery had a nice selection of cakes when we visited. There’s also coffee with several milk alternatives available.
Additionally More Pastry has a webshop, and they create cakes for special occasions.
I hope to get back there one day, to eat some more cake and make some more photos.
Type of place: Bakery and coffee
Completely vegan: no