For those who do not follow my instagram, first, go check it out, I post more regularly there, and second, I recently moved! I am now living both in Ukraine and Switzerland. And of course, a week before leaving Geneva to go to Kyiv, I found a cute little café around the corner of my apartment! I decided to quickly pop in for a coffee and a dessert.

Valya serves local, seasonal and biological food, with a specific focus on superfood and nutrition for well-being and health. A lot of the available food is also raw, the idea being that raw food is more nutritional. In addition to caring about the health of humans, they care about the health of the environment, serving 100% bio degradable packaging. Valya offers cold-pressed juices, soups, bowls, coffee, (almond based) drinks, sweets and desserts. There are some vegan options available, which is marked on the menu. There are also several gluten-free options.

The place itself is quite small, there are a few seats available, but it seems to be mostly take-away focused. A lot of the food is premade, and refrigerated. I tried a turmeric latte (also called golden latte), and a slice of banana bread. These turmeric lattes are kind of a new popular beverage. Turmeric is supposed reduce inflammation. That is always nice, of course. This specific version is based on almond milk, has some coconut oil, a dash of cardamom, and is sweetened with dates and cinnamon.

It was the first golden latte I had every tried! I am so behind on things #worstbloggerever. The latte had a nice foam but it was a bit tepid. Maybe that is normal with these type of drinks, but I personally would prefer a hotter beverage. I really liked the banana bread, it was nicely moist and very good. I think most of their sweets are vegan, they also had some energy balls and other stuff. 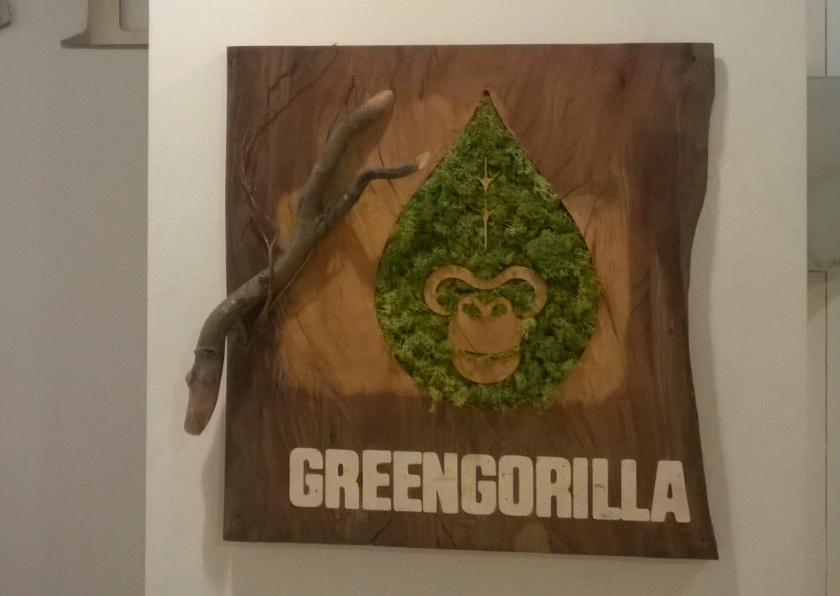 Okay story time! I tried to go to Green Gorilla several times actually. Green Gorilla posits themselves as a superfood place so I assumed they had at least some vegan food items. (Also because gorilla’s are mostly vegetarian!) They sells juices, smoothies, pastries, smart bars, vegan cookies, coffees and ‘bowls’. The latter are mostly pre-made and wrapped. So, the first time I wanted to visit, I was a bit late for lunch (13:30) and there was almost no food left in the shop. They are open the whole day, so that was a bit surprising. I noticed that they actually do not have so many vegan options; there is an açaí bowl and I believe a pre-made salad with veggies.

The next time I went they were closed since they were moving to another location! But it turned out there is a second nearby location in Globus, a large department store. To find the Green Gorilla there is not straight forward, it is part of a gym/wellness place on the 4th floor, and if you don’t know it is there you won’t find it.

The place itself is very beautiful, there is a great roof terrace and it is very lounge-y (probably because it is in a fancy wellness centre 🙂 )

So this time we were on time for lunch, but again most of the pre-made food was gone already. Fortunately, we could still try the açaí bowl, it was being made on the spot, it didn’t take long. I was with my favourite lunch partner, my husband (food blogging is easier with more people since you can try more things!) We both had a smoothie; the Green gorilla (banana, apple, avocado, mint, spinach, spirulina, ginger and dates) and the Blueberry love (blue berries, strawberries, vanilla, coconut, castor oil (?) and dates). The smoothies were seriously next level, they were delicious, huge, and decorated with fruit (great for pictures but made eating them a bit complex) I believe all smoothies are sweetened with dates, which I personally didn’t think was very necessary. We also tried two small vegan raw balls from ‘La smart truffe’ , while waiting for our açaí bowl.

The acai bowl was pretty but a bit disappointing at the same time. It is a basically a smoothie in a bowl with fruits on top. Size-wise it was much smaller than the smoothies we just had. It was tasty, and we did feel superhealthy afterwards, so there is that. I would go back for the smoothies for sure!

There was an error retrieving images from Instagram. An attempt will be remade in a few minutes.